Rucriminal.info continues to publish materials from the case against the gang of Konstantin Piskarev (Kostya Bolshoi) and his militants, who have committed more than 25 contract killings. Our articles contain the testimony of the accused in the case, including the killers, so the reader can see the events through the eyes of the "main characters" of the gang. In this publication, we will tell you about the attempt on the life of the head of Favorit and Sand International, Sergei Savchenko, which Kostya personally performed. In Piskarev their "Jekyll and Mr. Hyde" got along. If in the early and mid-90s he was just a bandit, then in the 2000s he became a successful businessman, with many companies, connections among officials, representatives of the special services, and high-ranking security officials. He even opened a restaurant "Shield and Sword" directly opposite the building of the FSB in Moscow and the region, which at one time was a favorite resting place for representatives of the power block. Piskarev was really engaged in serious business, but as soon as someone did something that he did not like, he would kill him. His victims were: officials who refused to sign the necessary documents; a fixer who took money to settle the issue with customs, but did not fulfill the promise; a policeman who received a bribe but did not complete it; competitors and even just a builder who did not complete the work on time. At the same time, having huge capital, Kostya Bolshoi personally went to most of the "wet cases". 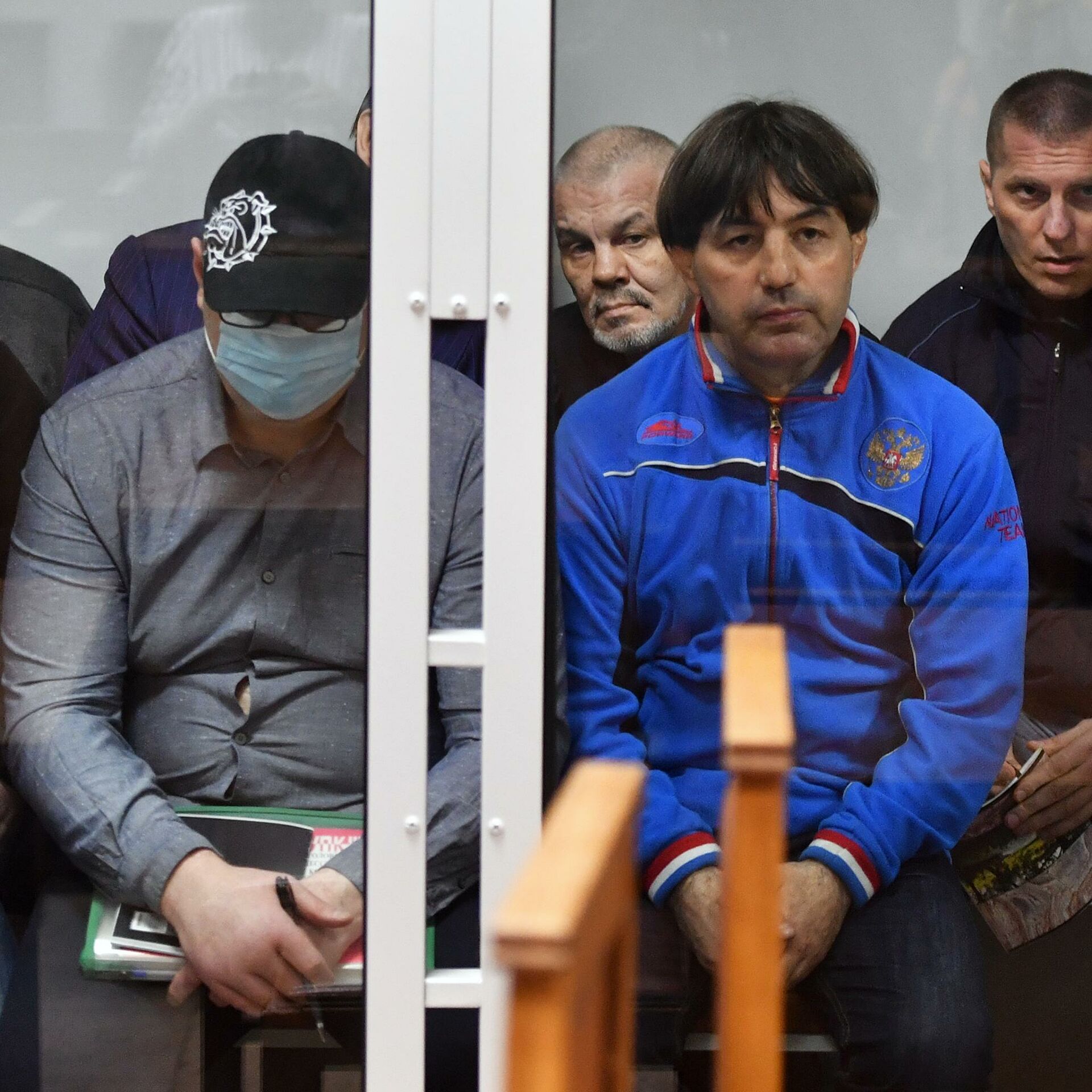 Piskarev had a friend, US citizen Michael Gissin, who, in turn, was a business partner of Evgeny Martynov, advisor to the Administrative Officer of the President of the Russian Federation. They organized a simple business. State Customs Committee "Russia" of the Administrative Department of the President of the Russian Federation was selling aircraft. A participant in this business, the director of the State Customs Committee Vladimir Kachnov and Yevgeny Martynov, made it so that one Yak-40 aircraft went to Martynov’s structure for a song. He agreed in 2003 that the director of Rusagrokapital Alexey Kobtsev would buy it for $ 950,000. Of this money, Matynov, Kachnov, etc., had to leave their shares, and the rest would be left to Savchenko. But unexpectedly, the Yak-40 turned out to have an engine malfunction, urgently needed 100 thousand dollars for repairs. Gissin advised to borrow money at interest to Piskarev. He gave 100 thousand dollars, but after learning what the amount was needed for, he wanted to become not just a creditor, but a full-fledged participant in the transaction and also receive a share from the sale of the aircraft. Savchenko refused, Kostya Bolshoi began to threaten him. The frightened businessman began to urgently over-borrow in order to settle accounts with Piskarev and forget him like a bad dream. But you can’t just forget Kostya. Exactly 4 days after the plane was sold, Piskarev in a mask personally shot Savchenko and his driver in the car. Both were injured. At the same time, Savchenko was so intimidated that he categorically did not say anything about Kostya during the interrogation. He agreed to tell the whole truth only after the arrest of Piskarev. By the way, Savchenko threw all the partners in the deal with the plane. He invested all the profits in the oil business, and only fed Martynov, Kachnova and Co. with breakfast.


Rucriminal.info publishes the testimony of the accused and witnesses in the Kostya Bolshoi case.


“The testimony of the victim S.P. Savchenko, according to which in the summer of 2003 Michael Gissin introduced Savchenko to Piskarev in order to issue a loan in the amount of $ 100,000 for the repair of the Yak-40 aircraft engine. Piskarev arrived at the meeting at the Penta restaurant, accompanied by four armed guards. At this meeting, they agreed on the amount of interest for using the loan, as well as on the place and time of the conclusion of the contract and the transfer of money. The next meeting took place at the Shield and Sword restaurant, located on Lubyansky Proyezd, in the presence of a notary between Savchenko and Piskarev, a written loan agreement was concluded in the amount of USD 100,000 for a period of 8 months. Two weeks later, Piskarev began to call Savchenko and demand a share in the ownership of the Yak-40 aircraft. Since this was not provided for by the loan agreement, Savchenko turned down Piskarev, despite his numerous threats of trouble. 2 months after the conclusion of the agreement, Savchenko returned the loan with interest, and the loan agreement was terminated. The termination of the contract also took place in the presence of a notary at the Shield and Sword restaurant, the meeting was tense, and Savchenko and Piskarev did not communicate anymore. On the day of the assassination attempt, 02.12.2003, at about 10 o’clock, Savchenko, together with his driver Petrov, went from home to the Pineapple cafe, where he had a business meeting that lasted about 40 minutes. When Savchenko and Petrov left the cafe and got into a Mercedes car, Petrov in the driver’s seat, and Savchenko in the passenger seat, Piskarev approached the car, dressed in a black tracksuit and a black mask. The driver of the VAZ 2109 car, from which Piskarev appeared, also beat him in a mask, Piskarev shot at Savchenmo through the windshield and hit him. Savchenko shouted to Petrov: “They came for me


oh, jump out! " Petrov twisted the steering wheel, opened the door and jumped out of the car. Piskarev was distracted by Petrov and spent 3 rounds on him. After that, Piskarev continued firing at Savchenko, but he managed to lie on the floor and the bullets hit him in the shoulder. Piskarev ran out of cartridges, and he said: "Bitch, not enough!" Then Piskarev got into a VAZ 2109 car driven by a masked driver and they disappeared. "


“Testimony of the accused Mishin: From Piskarev Mishin knew that Savchenko was engaged in aircraft. To organize the observation, Piskarev told Mishin the make of the car, registration plates and, possibly, the address. In the process of observation, Mishin used photo or video recording tools, which he transferred to Piskarev, so that he was sure that the observation was being carried out over the right person. On the day of the attack, at about 08:00, Mishin arrived at the Burevestnik yacht club, where he met with Piskarev, and in a VAZ 2109 car, which was equipped with a cache for transporting weapons, they drove to the area where Savchenko lived. The car was driven by Mishin. From the house where Savchenko lived, Piskarev and Mishin, following the victim’s car, arrived at the Pineapple entertainment complex on General Beloborodov Street. Piskarev instructed Mishin to cover the registration plates of the car, and then he opened the hood himself so that the stop would not look suspicious. When Petrov and Savchenko got into the Mercedes car, Piskarev approached them and began to shoot from a pistol at close range. After firing at least 3 shots on the windshield, Piskarev returned, sat down in the back seat of the car and, looking at his wristwatch, said “we will be in time”, implying that they will have time to bypass the police posts. After that Piskarev and Mishin returned to the Burevestnik yacht club. Mishin knew that Piskarev was dating a man named Michael, who was a foreign citizen, possibly a US citizen. The meetings took place quite often in the Penta complex located on the territory of the Olympic Stadium in Moscow. "


“Testimony of the witness VA Kachnov, according to which the witness knew Savchenko through Michael Gissin and maintained business and friendly relations with him. In 1998, Kachnov, being the general director of the State Customs Committee "Russia" of the Administrative Department of the President of the Russian Federation, was engaged in the sale of obsolete aircraft. At the suggestion of Kachnov, Savchenko, as an intermediary, was engaged in the acquisition of these aircraft for the governor of the Yamal-Nenets Autonomous Okrug. In the acquisition of Savchenko’s planes, the advisor to the Administrative Officer of the President of the Russian Federation E.Ya. Martynov helped. and his friend Michael Gissin. For the fact that Kachnov and Martynov helped Savchenko to get the order for the purchase of aircraft, the latter promised them a commission in the amount of 650,000 US dollars. Savchenko promised to pay these funds after the sale of the Yak-40 aircraft. First Savchenko promised to pay Kachnov and Martynov remuneration on November 7, 2003, then postponed the settlement date to January 2004. Around July 2002, Savchenko borrowed $ 41,000 from Kachnov. At the same time, Savchenko said that he needed this money to repay the debt. Otherwise, Savchenko said, they would kill him. Around October 2003, Kachnov learned that Savchenko had sold the Yak-40 aircraft and invested all the money in the oil business.


Testimony of witness Martynov E.Ya., according to which in 1998-1999 Kachnov introduced him to Savchenko. Kachnov at that time worked in the State Transport Company "Russia" and was engaged in the sale of obsolete equipment on the balance sheet, and Savchenko was the director of the company that acquired this equipment. As a result of the deal, Savchenko was to have a Yak-40 aircraft. The agreement on the aircraft was concluded between Savchenko, Kachnov, Gissin and Martynov in 2001. Savchenko promised to settle accounts with Martynov, Gissin and Kachnov, first in August 2003, then in September 2003, and then postponed the settlement to January 2004. Martynov learned about the postponement of the settlement from Gissin. The last time Martynov met with Savchenko was at the end of September 2003 at the Balchug Hotel.


Testimony of the witness I.Yu. Nafikov, according to which in 2003 Savchenko was selling the Yak-40 aircraft. General Director of Rusagrocapital Kobtsev A.V. expressed a desire to purchase this aircraft, which at that time belonged to the "Favorite" company. Nafikov conveyed this proposal to Savchenko, who in turn agreed with Kobtsev to sell the aircraft. On November 28, 2003, Savchenko told Nafikov by telephone that the deal on the plane had been completed, and a few days later he said that the money for the plane had been transferred to the account of Sand International. Nafikov knew that Savchenko borrowed $ 100,000 from Piskarev, showed Nafikov the loan agreement, and when the question arose about repaying the debt, he asked for a loan. Nafikov refused to lend $ 100,000 and recommended applying for money to the bank, which Savchenko did. The plane was sold for 950,000 US dollars, and the day after the sale, Savchenko was assassinated. " 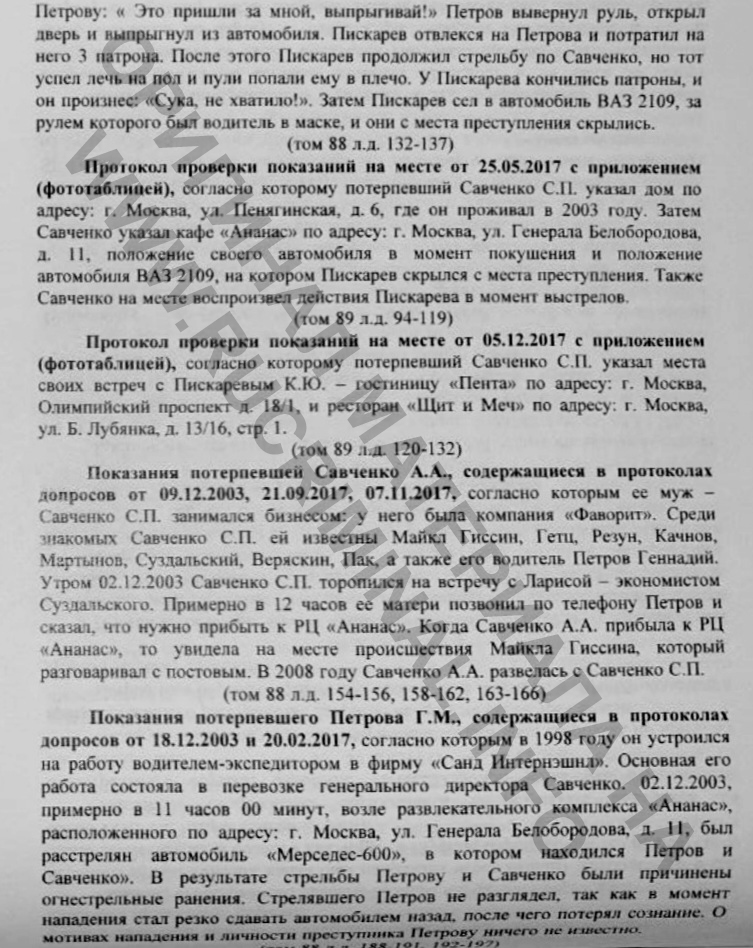